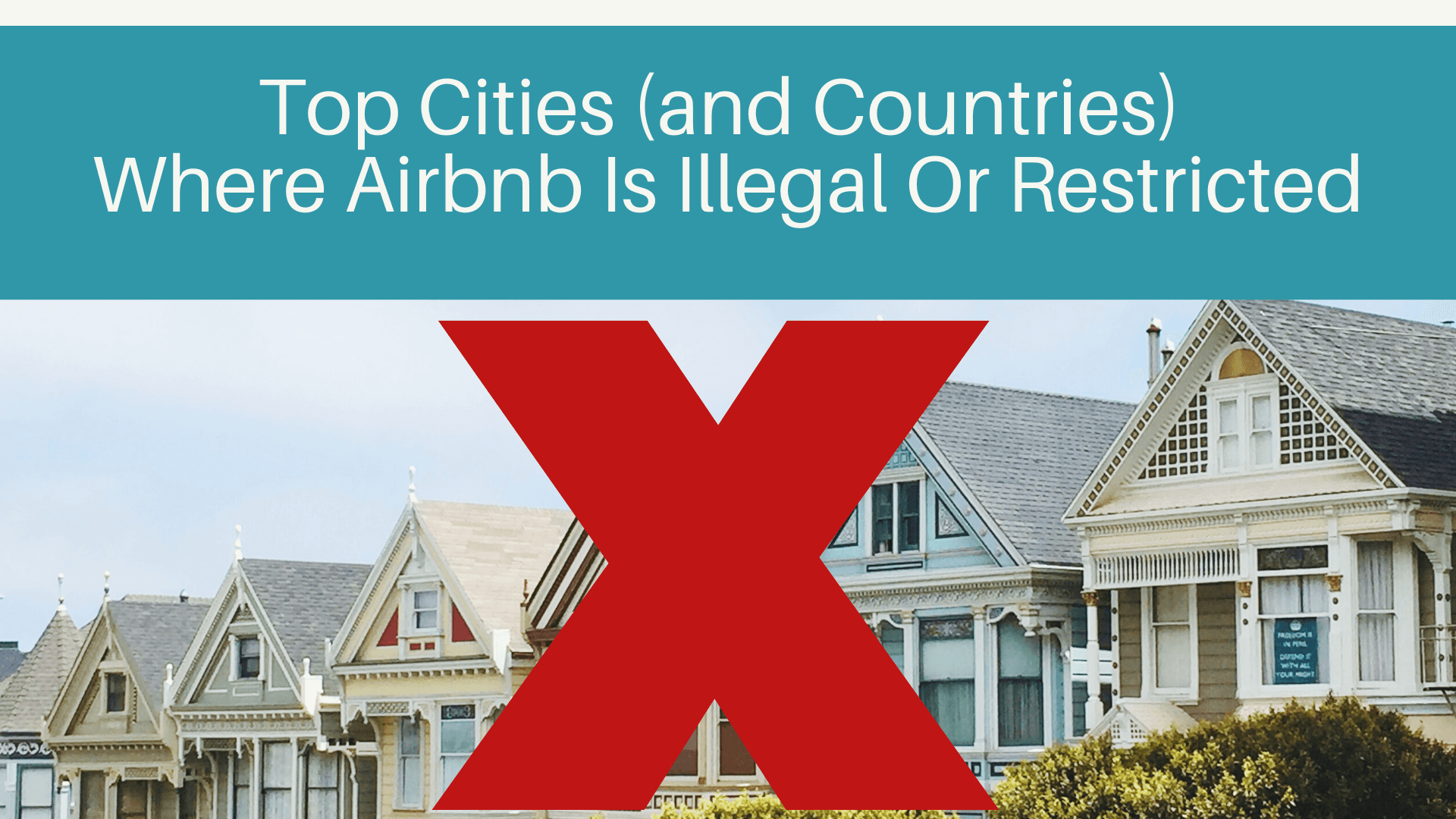 Thinking of running an Airbnb?

The first thing that every Airbnb entrepreneur MUST do is make sure Airbnb is actually legal in your location.

That may seem obvious, but even seasoned Airbnb hosts can find themselves on the wrong side of the law. Rules and regulations around short-term rentals are constantly and rapidly changing. Specific regulations can differ across countries, states and even cities.

Why Is Airbnb Illegal In Some Places?

Airbnb rentals are sometimes seen as a potential threat to residents. Short term rentals can affect landlord-tenant relations. Landlords may try to evict a long-term tenant because they see short term renting as more profitable

Local residents worry that their neighborhood will be “ruined” by an influx of tourists. They fear travelers will transform quiet residential neighborhoods into revolving hotel districts.

So before you start planning your arbitrage empire, make sure you do your research. Here are some of the destinations that restrict Airbnb and some places where short-term rentals are not legal at all.

[Do you want to know how to do market research to see if your area is profitable? Check out this in-depth guide on Airbnb Market Research. I get asked this question a lot: “Do you know if Airbnb will work in my area? Now, you can do your own research using my favorite tool].

Surprisingly, Singapore has some of the strictest Airbnb policies in the world. There are hundreds of Singaporean properties listed on Airbnb and technically it’s not illegal to book an Airbnb in the City-State of Singapore. But unwary guests may find themselves legally barred by security from entering properties. Hosts who breach the laws face fines of up to $20,000. They can also face eviction.

Charleston used to completely ban Airbnbs and similar short-term rentals. In 2018 they loosened up their rules a little bit. The city’s listings are now divided up into three categories based on the home’s age and historical significance. Regardless, the host must live on the grounds and there is a limit of no more than four guests allowed in a Charleston rental.

At first, Jersey City, NJ, doesn’t seem like a hot tourist destination, but its proximity to New York makes it one of the busiest tourist cities in America. New York accommodation prices are through the roof and New Jersey offers a more affordable option for travelers. Plus, it’s close to airports and trains.

Airbnbs are a hot topic in the area. In November 2019 residents took on Airbnb with a referendum to change regulations and hosts are now restricted to renting out only portions of their homes on Airbnb. They must also be present during a guest’s stay, so that means rentals of entire properties are currently banned.

In New York, renting a home as a holiday Airbnb is illegal, if you don’t live in the home. That will come as a shock for many, because New York is also Airbnb’s biggest U.S. market. Currently, New York’s short-term rental laws prohibit renting out an entire apartment and this applies to most buildings. The owner of an Airbnb must be present at the property and there can be no more than two “boarders.”.

Miami Beach, Florida, has the most Airbnbs per capita in America, but the city is in a court battle with Airbnb and short-term rental operators. Currently, the city prohibits rentals of six months or less and this applies to most residential neighborhoods. Anyone setting up an Airbnb here will want to check regulations in their specific area.

Spain was one of the first countries to regulate Airbnbs in private homes and those regulations are widespread across Spain, differing by city. Barcelona is one of the most popular destinations in Spain and the world. In this city, Airbnbs must get licensed, but no new permits were issued in recent years.

Many people dream of partying in the Hollywood Hills and living the California dream, but that dream is dead. The city of Los Angeles plans to ban the use of Airbnbs as party houses. Non-party destinations are also restricted and hosts can also only rent properties if they spend at least six months out of the year living there.

Hosts in Amsterdam also face Airbnb restrictions so they can only rent their properties for a limited number of days. As of January 2019, there is a 30-day limit out of the year and the city collects a 6% tourist tax on all bookings.

The entire country of Japan has strict Airbnb laws. In June 2018 almost 80% of the country’s Airbnb listings were pulled from the site. Now hosts must register their properties with the government and rental periods cap at 120 days per year.

While Airbnb is illegal in Thailand, offenders are unlikely to receive a jail term and guests have no punishments for booking Airbnbs. With Thailand being a popular tourist destination, many hosts — and guests — are willing to risk the consequences.

Other US cities with strict Airbnb policies

Some cities severely limit Airbnbs in certain neighborhoods. Especially those in city centers or historic districts. That includes hotspots such as New Orleans’ infamous French Quarter.

Here are other US cities that severely restrict short term rentals:

Foreign destinations with Airbnb restrictions include:

Thinking of taking the risk and breaking the rules? Not a good idea! Depending on the severity of your breach, you could face bans, fines or even jail time if you’re in an area where Airbnb is illegal.

Jail terms for illegal renting are rare, but fines are nothing to joke about. Miami has the most expensive fines in the country for illegal short-term renting. They start at $20,000 for the first violation. They go up to $20,000 per violation for three or more offenses. In New York, even advertising an illegal rental could come with fines up to $7,500.

Other countries may impose even stricter penalties. A Parisian host had to pay $53,800 in fines to her landlord. The Telegraph reports she had been listing her apartment illegally for years.

But don’t let stricter regulations deter you. There’s still a huge potential for growth in the Airbnb market. Many entrepreneurs run successful Airbnb businesses, but they do so legally.

If you want to be a successful Airbnb host, do your due diligence. Look into the country, state, and city laws. Read up on news articles and pending law changes in your neighborhoods. Check out Chamber of Commerce and City Council minutes to glean recent debates regarding short-term rentals.

Ready to become an Airbnb host? Get started on Airbnb with my guide: Making Money with Airbnb Hosting: The Most Complete Guide on the Planet