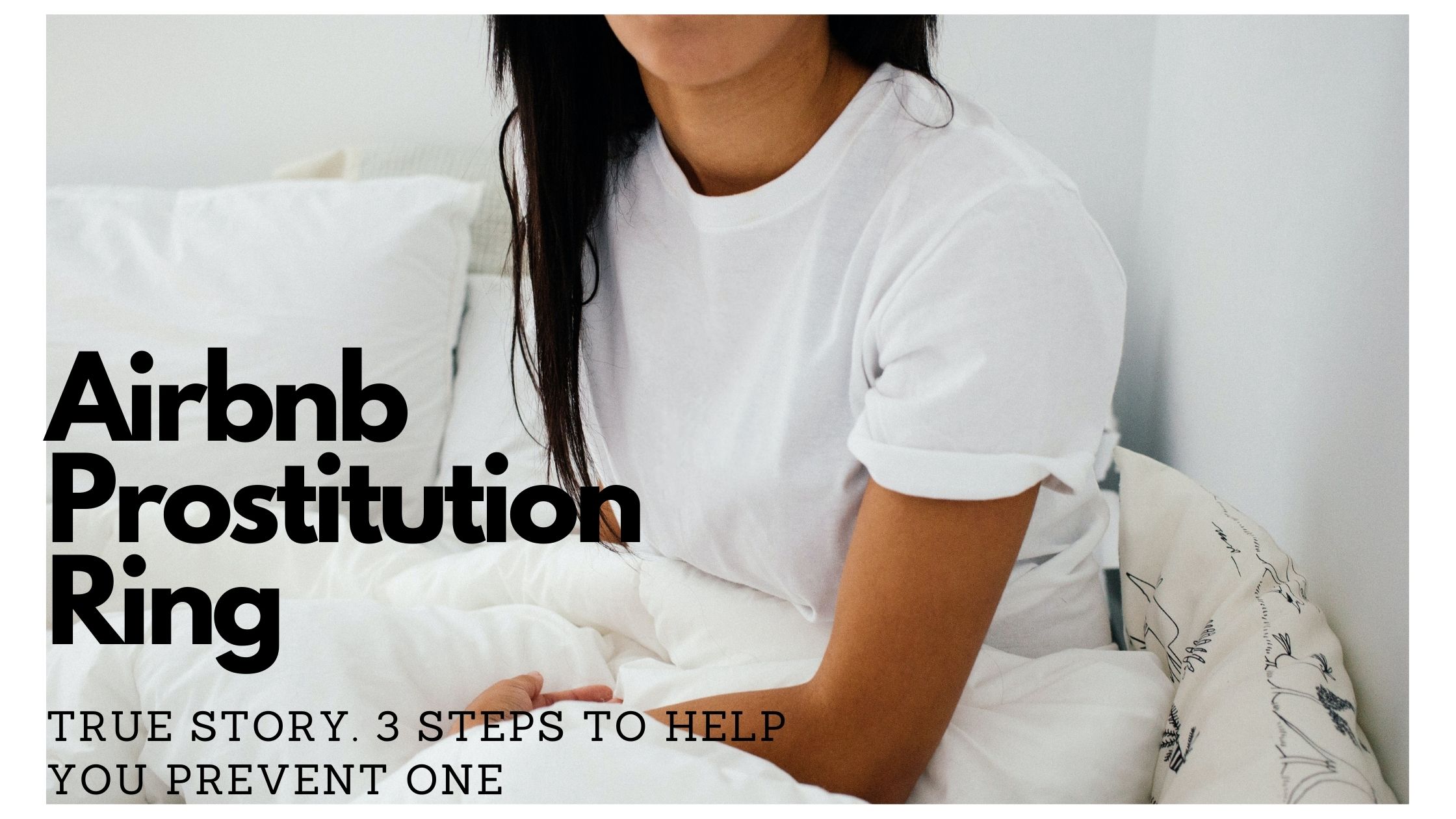 I took some time with this article. It happened a year ago and certain actions were already taken. I won’t go into it, but in hindsight, I could have done a better job at preventing it.

This is a story from a current Airbnb host – how I found out and broke up an illegal Airbnb prostitution ring.

I can’t even joke about this.

It was April 1st (Fool’s day), and the clock read 11:24 PM. I was sitting on my living room couch watching TV, about to turn off the TV and go to sleep. Out of habit, I checked my phone.

An Airbnb inquiry with the name AFMFL arrived in a text message. Strange, I thought. What kind of name is that? I had a faint idea that it was maybe a scam artist, so I started to read the text. It was late and I had very little patience for any ensuing B.S.

What came next made my heart beat out of my chest. I instantly regretted reading it so late…

Who is this punk?

A couple of thoughts went through my mind, “Is someone pranking me right now?!” I’d have to give this ‘guy’ credit because it was beautifully executed. He got one crucial detail right – the current guests were ‘three girls.’ There was no way AFMFL could possibly find out about this.

“Damn,” I thought. Maybe it was my best friend or someone hacked into my Airbnb account? Wild thoughts were being dreamed up… I had to regroup mentally and it was hard because it was so late. Just a few minutes ago, I was planning on going to bed…’ Well, that’s not going to happen now.‘

I’ve certainly done some (sophisticated) pranks in my younger days. Could it be revenge? Could it be? Who would still hold vengeance from almost a decade ago?

Immediately, I started doing a mental checklist of all my friends that I pranked in the past. The list wasn’t long, and I quickly scrolled through the mental checlist.

It couldn’t have been my friend Ben; he was in Japan. He’s the only person I can think of that would try and get me back after all those years of my stupid, self-indulgent, crude, and at times hilarious pranks.

Yes, I’m the first one to admit that I was an immature idiot.

I calmed down after a few minutes. A couple of new ideas ran through my mind. “Maybe this guy is a competitor and is trying to scare me out of business?” Or “This has to be a stupid fu***** kid.”

I didn’t live in reality anymore, but rather in my own crazy theories. I remember telling myself, “think logically. Think! LOGICALLY!! Verify if this AFMFL dude is legit.” If he was indeed who he claimed to be, then without a doubt, he would know my apt’s address and unit number.

I fired off a text asking this “AFMFL” dude to verify my address and unit number.

“Oh Fuck!”, I thought. He knew my address and unit number. This was the definitive proof that I needed.

My heart dropped onto the floor, stomach churned and curled up into a pinball, and I started to hyperventilate. A flurry of thoughts hurriedly went through my head. My thoughts were like bullets; it was impossible to hold onto one thought long enough before I was chasing the next thought.

It was over for me. The years of hard work, my business, and my livelihood was all about to go up in flames. I was DONE.

“How could I have been so careless?”
“Why is THIS happening to me?”
“I didn’t do anything to deserve this.”

After a few minutes of panic and big gulps of whiskey (thank god for alcohol), I regained my logical brain.

And a few minutes later when the whiskey finally kicked in, my headspins stopped. My heart didn’t feel like it was going to thump out of my chest, my breathing returned to a regular, steady rate and brain finally plunged into action, wasting no time; I had drawn up a plan.

I’m going to send these ‘three girls’ a text to tell them to pack their belongings immediately, alert Airbnb to take legal actions, and apologize profusely to my neighbor.

And that was precisely what I did. It took me a while to write this story. I waited this long because I didn’t feel comfortable initially, and was fearful of the media blowbacks and legal implications.

I even turned down a chance to make national news on ABC7 News Bay Area. At the time, a reporter was doing a story on Airbnb, found me on the internet, and wanted to interview me on ‘Live TV.’ I told her, “no fucking way.”

Who knows? Maybe I would get my fifteen minutes of fame or crucified by Airbnb. Who knows? You know?

What I learned from my Airbnb Prostitution Ring

In the subsequent 16 months, I’ve researched and implemented a few key measures and also wrote about the benefits of such new measures. This is what I do now (and my advice to those who are either at the beginning of their hosting journey or an experienced Airbnb Superhost).

How to avoid your own Airbnb prostitution ring in 3 steps

2. An outdoor security camera – if I had eyes outside of this apartment…this crazy sex scandal would have been avoided.

Now, I purchase an Arlo for all of our units (just in case).

Note: option 3 is best if option 2 is not available. This works best if your property manager doesn’t want you to install a camera on the property or on the premise.

3 Noise monitoring devices – Another great tool in your arsenal. Can you imagine the ability to instantly verify the “sex sounds?” Well, you can’t win them all.

In the end, I’m just glad no one got hurt. So, there you have it. I hope this will never happen to you.